The 147th Annual Meeting of the American Fisheries Society in August brought more than 1,600 attendees and guests from 15 countries together in a beautiful waterfront location in Tampa, Florida. The meeting featured 74 symposia and 17 contributed paper sessions for a total of more than 1,000 oral and 200 poster presentations. In contrast to the later hurricane season in Florida, this week featured sunny, hot, and mostly dry conditions, allowing attendees to fully enjoy everything Tampa had to offer, including the solar eclipse on Monday.

The meeting began on Saturday with the Governing Board meeting, with finances, publications, and membership marketing as major topics of discussion. Continuing Education Workshops including Bayesian statistical methods, geographic infographic systems (GIS), stakeholder facilitation training, fish ageing, age and growth analysis with R, human dimensions survey design, addressing unintentional bias in the profession, and leadership provided attendees with practical, hands-on skills. After a jam-packed day of workshops and Section meetings, attendees reunited with old colleagues and made new friends at the Welcome Networking Reception in the hotel.

One highlight of Tuesday’s program was a public panel on the Florida lionfish invasion, featuring Florida State Representative Holly Raschein, James Ballard of the Gulf States Marine Fisheries Commission, Stephen Gittings from the NOAA Office of National Marine Sanctuaries, David Ventura from Whole Foods, Will Patterson of the University of Florida, and Kali Spurgin from the Florida Fish and Wildlife Commission. Each offered a different perspective on how to stem the lionfish invasion and video of the panel is available on the AFS Facebook page.

Wednesday began early with the Spawning Run and Carcass Crawl right outside the hotel on the Tampa Riverwalk. Matthew Young was first runner across the finish line for the men, while Katherine O’Reilly led the women. From there, it was a race to the Trade Show floor to get in the last-minute bids in this year’s spectacular Silent Auction, featuring items ranging from posters and books to fishing trips and cruises.

Following the Business Meeting, attendees made the short trip to the spectacular waterfront Florida Aquarium, where they indulged in gourmet tacos, mac and cheese, and other tasty treats in environments ranging from the Everglades to coral reefs.

Many thanks are due to the Florida Chapter and the Southern Division for hosting such a large and well-organized meeting. See you next year at the 2018 Annual Meeting in Atlantic City, August 19-23.

See all photos of the meeting: flickr.com/photos/americanfisheriessociety/albums

Watch recordings of the three Plenary Sessions and the Business Meeting at vimeo.com/americanfisheriessociety. 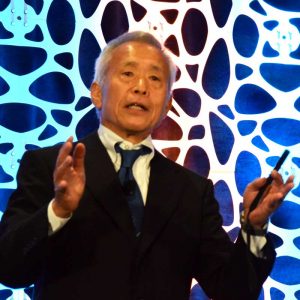 Katsumi Tsukamoto, President of the Japanese Society of Fisheries Research, Professor at the Department of Marine Science and Resources, College of Bioresource Sciences, Nihon University

Contributions of Fisheries Science to Society: The Example of Eel Research for Sustainable Use and Conservation

How and where eels reproduce has been a mystery since the time of Aristotle, but Tsukamoto used this basic scientific question to discuss the relevance of basic and applied science to human society. He described the long quest to find the spawning grounds of the Japanese Eel – from locating the general spawning area in 1991, to identifying a specific sea mount and discovering spawning timing synchronized to the new moon, to today’s environmental DNA and video evidence that may show an eel on its spawning grounds for the first time in history. This decades-long quest formed the basis of his children’s book, Pursuing the Mystery of Eels, and he started a public awareness campaign for eel conservation that led to 88 school visits in just the past year. He noted the difficulty of funding long-term basic research in recent years, when quick results are now desired. 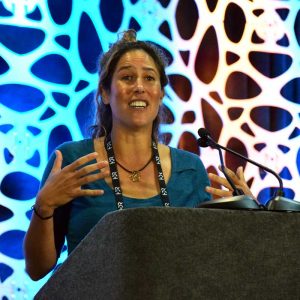 Sex in the Sea: Turning Science into Stories the Make a Difference

Even scientists can’t understand other areas of science, which illustrates the importance of learning to communicate in a way that’s compelling, said Hardt. It is our social responsibility and we know how to do this if we just think of it in terms of storytelling. Other people don’t get to see what we see every day and those personal stories activate the listener’s entire brain. Some of the ingredients of storytelling include how you do your work (such as the story of researcher sending whale vaginas via FedEx) or sharing those moments of discovery. Humor (such as stories of what dating would be like if humans mated like animals or #fieldworkfail as an image hashtag) brings out the human side of science. Hopeful stories are also important, as people want to be inspired and not only hear doom and gloom. 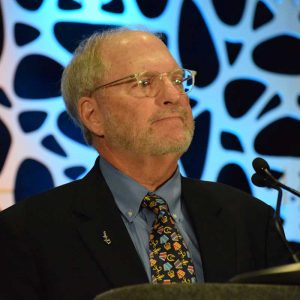 Stand Up for Science: Sticking to Evidence over Activism, Misinformation, and Death Threats

Payne opened by saying that he has been involved in many natural resource societies, but AFS is the most honest politically and scientifically to its mission. When “post-truth” is the word of the year, there is not only a gap between people and scientists but hostility. Talk radio is not under the constraints of peer review and “merchants of doubt” campaign actively against science. Some scientific figures are even besieged by both left and right leaning groups at the same time. For example, it is unethical to prevent scientific advancements like golden rice from helping impoverished children. He described a “spiraling down of science” where many scientists are now afraid to do outreach. Scientists should do more to have each others’ backs. The gap will be bridged in the streets, not in labs, and scientists should talk as fathers, mothers, and neighbors first, then as scientists.