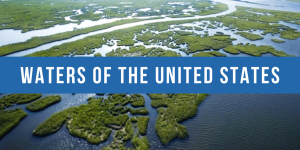 The EPA and the U.S. Army Corps of Engineers are pursuing a two-step process to repeal the 2015 Waters of the U.S. rule and replace it with a narrower legal definition promoted that would provide fewer protections for headwaters and wetlands.  The 2015 rule was developed using the best available, peer-reviewed science and clarifies which waters are and are not categorically protected under the Clean Water Act.

The repeal and replacement of the 2015 rule could result in a rollback of Clean Water Act protections for a majority of the nation’s streams and wetlands, including the headwater streams and millions of acres of seasonal wetlands that provide valuable habitat for many species of fish.

AFS fully supports the 2015 WOTUS rule and is concerned that a narrower rule would have far-reaching implications for fish, wildlife, and their habitat.

Keep up with new developments in our WOTUS news feed.